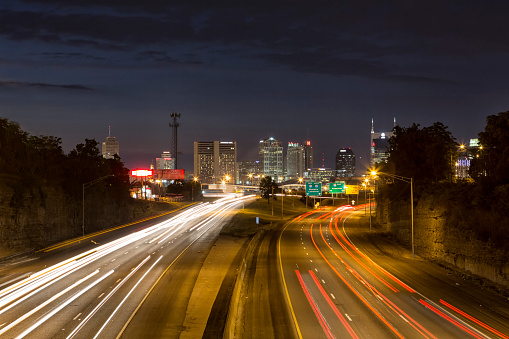 Traffic congestion, distracted driving, and speeding contribute to a lot of wrecks along I-65 in Nashville

Severe injuries and fatalities from car accidents on Interstate 65 in Nashville are a problem, which is why Tennessee law enforcement agencies are calling for drivers to slow down, avoid distractions, and practice other safe driving habits.

According to a recent report by FOX 17 News, a spokesperson with the Williamson County Sheriff's Office (WCSO) said distracted driving, speeding, impaired driving, following too closely, and lack of seat belt use are the main contributing factors to deadly crashes on I-65.

In 2021, the WCSO reports there were 17 fatal accidents and 932 crashes that resulted in injury on I-65. One of those fatalities was a 30-year-old Nashville woman who died in a wrong-way crash on I-65 South in September 2021.

Why do so many accidents happen on I-65?

Functioning as a local connection between Nashville and Louisville, I-65 is a major corridor for drivers entering and exiting Middle Tennesse. It's also heavily traveled by people either coming or going from out of state, which can cause traffic congestion and increase the odds of a car accident.

Data from the Tennessee Department of Transportation supports that idea, as statistics show fatal car accidents and injury-causing crashes occur more on Sundays when local drivers and out-of-state drivers converge on I-65 to create higher traffic volumes.

“When you add that traffic on top of local traffic, that just creates more of a problem for people who aren't familiar and we can even go so far as to say there's been a lot of folks that are having to look at their GPS while they're driving, so they're distracted,” said Greg Wilhelm, Corporal for WSCO’s traffic unit.

How TDOT is trying to make I-65 safer

In an effort to increase safety, help reduce traffic congestion, and give the local economy a shot in the arm, the state has started work on a $160 million project to widen the 25-plus mile stretch of I-65 from Nashville to the Kentucky state line. The project, which is the largest in TDOT history in terms of cost, will be paid for through the National Highway Performance Program (80 percent federal funds, 20 percent state funds) and is slated for completion in April 2025.

"This project will allow easier access for interstate commerce as well as improve the life for daily commuters," project supervisor Derek Pryor said to Construction Equipment Guide in a recent interview.

Along with widening the road, the I-65 project includes bridge work, replacing overpasses, adding retaining walls, converting a weigh station into parking for 18-wheelers, and installing Intelligent Transportation System (ITS) facilities throughout the whole corridor. An intelligent transportation system can deliver real-time information to drivers such as traffic delays, accidents, severe weather, and work zone conditions so that motorists can adjust their driving and, hopefully, avoid causing crashes.

Any time improvements can be made to make our roads safer, we're all for it. The problem is that regardless of what safety upgrades are made to I-65—or any other roadway in Middle Tennessee—it only takes one negligent driver to cause a crash that results in severe injury or death.

And whether they were speeding, texting, driving under the influence, or otherwise operating recklessly, negligent drivers need to be held accountable for their actions.

If you were injured in a Nashville crash that was not your fault, you have recourse through the civil justice system—and our law firm can help you fight for the justice and financial compensation you deserve.

We pride ourselves on helping people who have been hurt through no fault of their own, and we aren't afraid to take on tough cases because we know what it takes to win in Tennessee.

To find out more about how we can help you, contact us today for a free consultation with an experienced Nashville car accident attorney. Our office is located in Goodlettsville and we proudly serve clients throughout the Nashville area.